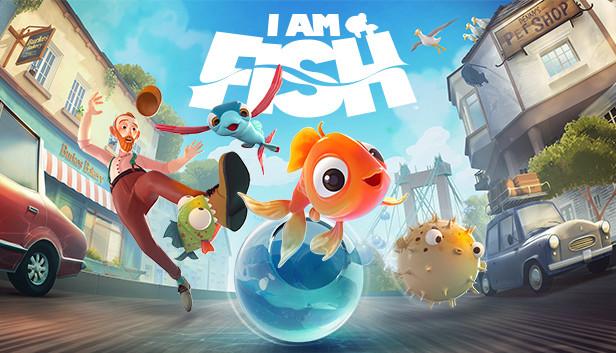 I’m Fish is a magical, physics-based experience starring four intrepid fish buddies, forcibly separated from their house in a pet store fish tank. Over the course of the match, you combine them as they float, fly, roll and chomp their way to the open sea from the far-flung corners of Barnardshire (the smallest county in England) in their bid for liberty and also to reunite once more. Meet our heroes! Goldfish — cheerful, brave, and adventurous, a natural-born swimmer! Pufferfish — a bit slow but kind-hearted who will also pull up right into a ball and roll up across territory. Piranha — crazy, chaotic, loud, inconsistent, and loves to snack — clearly.

Flying Fish — a bit aloof sometimes but a real softy at heart, together with the ability to slip through the atmosphere! All these plucky heroes will depart no more bowl unturned, placing their heart and shoal to the assignment to re-unite! Swim, roll, glide, chomp, flip flop, inflate, fly and bite your way through materialistic challenges. An easy, intuitive control strategy leaves no explanations if your fish perish, leaving you feeling quite gill-ty.

We won’t live on grizzly fish departure, but if your fish drop too far in anything make-shift fishbowl, it finds itself, runs out of the atmosphere, or normally flounder, you’ll be hauled back to the latest checkpoint to boost your strategy. Our four fin-tastic buddies will probably be hitching rides in a variety of ad hoc water carriers such as jars, mop buckets on wheels along with also the occasional pint glass. Cheers! Navigating in every make-shift aquatic automobile poses its own special challenge, but do not worry, the comparative freedom of water is not too far off with inviting fountains, swimming pools, and err, sewers filled with hazardous substances to dab in, before attaining the last goal — the glistening, open sea.