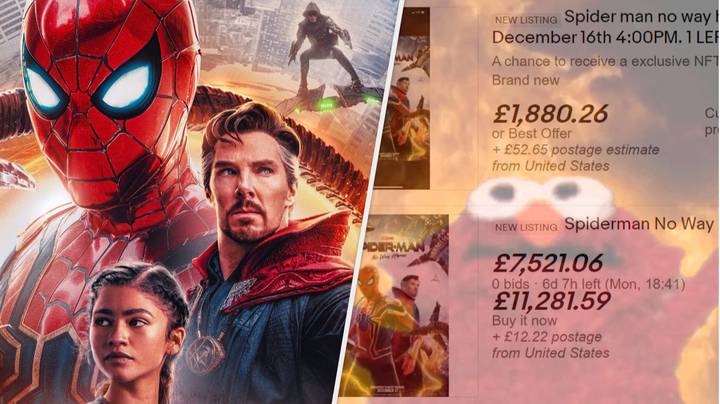 Spider-Man – No Way Home Tickets are being sold online for ridiculous money after scalpers took them on Monday morning.

Twitter is full of complaints about tickets to the Marvel movie of the year. They’re just looking at the wrong websites. Official cinemas are collapsing under the pressure of the sheer volume of people looking for tickets. Instead, you can go to eBay to find tickets for No Way home at a low price of PS15,000. Tickets for several thousand dollars are available if that seems a bit steep.

As many people are eager to see Peter Parker battle the demons from his past like Doc Ock or Green Goblin, demand has risen through the roof. It is not surprising that these tickets are selling out fast. With the leaked set that reveals the inclusion of Spideys in the background, it seems that spoilers are not getting the upper hand.

Even though the stakes are higher than ever before, this will not be Spider-Man’s last movie. “We are getting ready for the next Spider-Man movie, with Tom Holland, Marvel, but it just isn’t part of… We’re thinking of these three films, and now we’re going on to the next three. “This is not the final of our MCU movies,” Amy Pascal, producer, stated in an interview with Fandango.

No Way Home isn’t an easy task for Peter Parker. Actor Tom Holland confirmed that this chapter was a “dark” and “sad” part of his journey. It seems like he would benefit from the knowledge of the Spideys that came before him, which is one of the most popular rumours about this movie.

Pascal said that each actor brought their humanity to the role of the hero, referring to the three versions of the hero seen on the silver screen over the past decade. “All of them were brilliant, and Tom is unique. He’s the embodiment of everything Peter Parker wanted. He is funny, charming, and… a great actor and an athlete. And he has such humanity.”