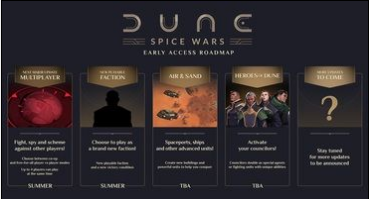 Today, publisher Funcom and developer Shiro Games unveiled the early-access roadmap for Dunes: Spice Wars. This gives us a better view of the first set of new features and content that will be added to the strategy game by 2022.

The early access roadmap for Dune: Spice Wars includes major additions such as the long-awaited multiplayer feature and other features that have yet to be shared. The game’s team notes that this list is incomplete and may change depending on feedback from players.

The Dune: Spice Wars’ early-access roadmap was launched on June 20, 2022, when the multiplayer mode was released. It supports dedicated servers, peer-to-peer matches, and up to four players and allows you to choose between 2v2 or free-for-all while also deciding the strength and possible AI factions.

This summer, the game will feature a fifth playable faction and a new win condition.

The Air & Sand update will be released in 2022. It “will dig deeper into warfare and introduce new units to the mix. Spaceports, ships, and advanced units will be added to the mix, along with new buildings to aid in your quest for Arrakis.

Last step in Dune: Spice Wars’ early-access roadmap. At least for the moment, councilors receive an update that transforms them into units capable of filling the role of special agents and additional fighters on the field.

The game’s content will not stop there. However, we will reveal what comes next at a later time. Spice Wars: Here’s what we thought when we played the early access version.