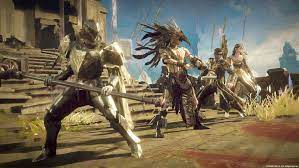 You may have noticed that some of the armour sets you saw in Babylon’s beta sessions might be familiar to you. They’re from Final Fantasy XIV, and Naoki Yoshida, a director, gave PlatinumGames permission to use those assets. Yoshida and Babylon’s Fall producer Yosuke Saito shared their stories in a blog.

Babylon’s Fall has opened for its third closed beta testing. Players have noticed striking similarities in the hack-and-slash games’ armour and emote with those found in Final Fantasy XIV. Many results include in-game examples of both titles. However, Yoshida & Saito have clarified that the borrowed assets are not intended, at least for now.

Saito claims that Babylon’s Fall is using some of the MMO data to expand its gear range and that these borrowed pieces are very common in the introduction and middle-game sections of the project. He also noted that “most of the equipment” should be exclusive to PlatinumGames titles. Yoshida added his comments to the post. He said Square Enix couldn’t afford an unlimited budget for the new title, which is why you can see the Final Fantasy XIV bits.

Yoshida didn’t seem to think that borrowing data from one game for another would be a major issue. However, I am a little less surprised. Reused assets are a common source of anger for eagle-eyed players. While I can understand the reasoning behind this, it is strange to be so upset about it. Square Enix has both Yoshida and Saito on its board of directors. They have a stake in Square Enix’s game. I think it should be simple to connect the dots between the two by making the one easier to test based upon the success of the other during its development phases. These games are not from the same series. However, these are people who are working together to create new projects that they are interested in.

Babylon’s Fall seems to have more pressing issues than it needs, especially considering that games often reuse assets. While I don’t care about the texture of staff, I am more concerned about how it is shaping up as a service game. It has yet to be released, but I hope that a set of assets will save time and allow the team to make it better.