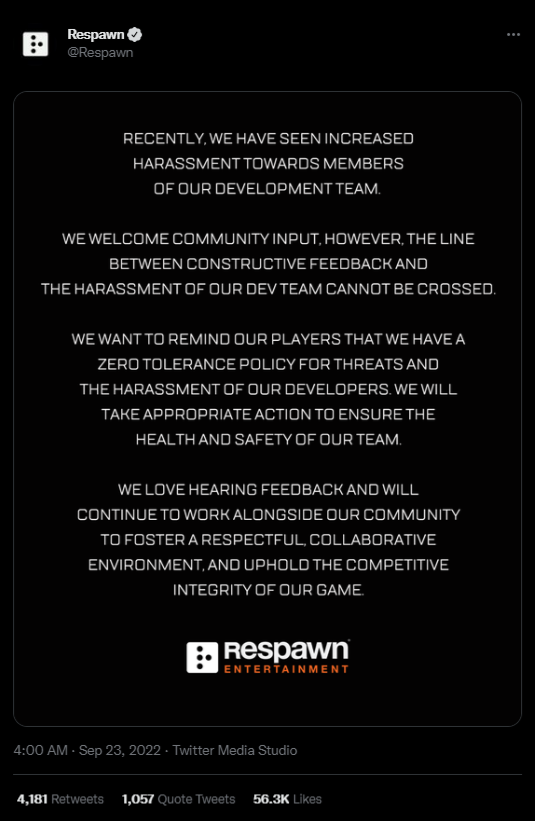 Apex Legends developer Respawn Entertainment has broken the silence and decided to address what they call an increase in “harassment towards members of our development team” warning the players by posting on their Twitter handle.

“We want to remind our players that we have a zero tolerance policy for threats and the harassment of our developers,” the statement continued. “We will take appropriate action to ensure the healthy and safety of our team”.

“We love hearing feedback,” Respawn concluded, “and will continue to work alongside our community to foster a respectful, collaborative environment, and uphold the competitive integrity of our game.”

Respawn’s tweet was responded to by Destiny developer Bungie who had to go to the court due to their developers getting doxxed, threatened and abused by their players. Bungie offered solidarity saying, “Standing against toxicity and harassment takes all of us working together to build healthier communities. We are with you in that effort.”

It has been observed that Respawn’s statement has a resemblance with the God of War developer Santa Monica Studio back in July, which was released after online abuse aimed at members of the team when the rumoured Ragnarök didn’t release at the promised time and decided to remind players “Our fans inspire us, and we understand the passion and desire for more information. But that passion should not be toxic nor come at the expense of any human being’s dignity.”

This year many developers have decided to stand against online abuse and have started to break the silence against the toxicness of their so-called fans. In July, Neil Druckmann, the creator of The Last of Us, Cory Barlog director of God of War, and Ron Gilbert, creator of Monkey Island, voiced their concerns and warned the toxic fans.